Freedom for Excellence: Pinckaers Alternative to “Ockham’s Other Razor”

In our last post we looked at Pinckaers criticisms of Ockham’s Other Razor (i.e. William of Ockham’s notion of free will), which he calls “freedom of indifference.”  This post is Pinckaers description of what he thinks is a more accurate notion of human freedom: freedom for excellence. 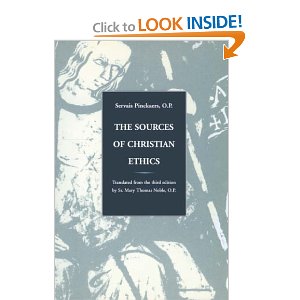 Freedom for excellence is first illustrated as akin to a child learning to play the piano.  She must have some predispositions to learn—an attraction to music and an “ear for it” (354).  In this case, her predispositions enable her to develop the freedom to play beautifully after much discipline (355).  Progress is developed by regular exercise, or, a habitus (355).  The ability, in the end, to play with ease, compose new music, and delight oneself and all who hear, is the stage of maturity corresponding to freedom (355).  Similarly, the virtue of courage is “acquired far more through small victories of self-conquest, repeated day after day, than through dreams of great actions” (356).  The author briefly mentions what he calls “the internal harmony of the virtues”—“true courage is worth little without wise discernment as to what should be done, and without self-control, justice, and generosity” (357).  A notion of freedom in this framework places predispositions and natural inclinations in service of freedom (rather than opposed to it, as with Ockham’s Other Razor), in fact enabling it (357).

The root of freedom is twofold: 1) a sense of the true and good and 2) a desire for knowledge and happiness (357).  These are the semina virtutum (the seeds of virtue).  Our natures are inclined to sense the virtues and give spontaneious praise to them, and this is the sequi naturam (follow nature) principle of the ancients and what St. Thomas calls the instinctus rationis (rational instinct).  “Far from lessening our freedom, such dispositions are its foundation.  We are free, not in spite of them, but because of them” (358).

The Stages of Development

Freedom for excellence “requires the slow, patient work of moral education in order to develop” (359).  The author takes us through these stages as he sees them.

The first stage is a delicate affair in which the moral educator must be neither authoritarian nor libertarian, but somewhere in between, making sure the “child” understands that the “discipline, law, and rules are not meant to destroy his freedom … Their purpose is rather to develop his ability to perform actions of real excellence by removing dangerous excesses” that “jeopardize his interior freedom” (360).  The student must experience the love of his teacher and the love of God (362).  This discipline “appeals to natural dispositions, to a spontaneous sense of truth and goodness, and to the conscience” (360).

The key characteristic of the next stage, the stage of progress is “taking one’s own moral life in hand, by a predominance of initiative and personal effort, by the development of and appreciation and taste for moral quality, and the deepening of an active interiority” (363).  In is in this stage that the virtues begin to form and take shape and the “adolescent” begins to find joy in the virtues themselves and develops strong dispositions for action (363).

The final stage is that of maturity (or “perfection” in the human sense of “complete,” 366).  This includes mastery of excellent actions and creative fruitfulness (366).  In this stage charity is “perfected” or matured such that the persons “chief concern is to be united to God and to find all their joy in him” (368).  Yet this joy passes from God to others so as to make their virtue beneficial for the community (367).  Pinckaers clarifies that this description in “stages” does not necessarily mean that in experience the process is perfectly “linear,” but involves a “certain dialectic” (372).  Also, one should not get the idea that once “maturity” or “perfection” is reached there is no room for growth (373).

Compared with Freedom of Indifference

By T h e o • p h i l o g u e in Uncategorized on November 6, 2010.
← Ockham’s Other Razor: Pinckaers Account of Ockham’s Notion of Free Will How Academic Research Benefits Christian Ministry and Education →