Utilitarianism: What is it? Why does it not work?

The following is a mixture of my own thoughts and thoughts from “The Moral Course of Thinking” in Gathered for the Journey: Moral Theology in Catholic Perspective, ed. David Matzko McCarthy and M. Therese Lysaught. Grand Rapids: Michigan: Eerdmans Publishing Company, 2007. pp. 1-19. 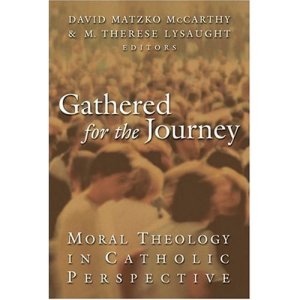 Two of the most popular approaches to ethics in modern philosophy are utilitarianism and deontological ethics, both of which are normative theories.  Normative theories of ethics are those that offer a principle as the key criterion by which actions are determined to be good or bad.

The more common of these two approaches today is probably utilitarianism.  The strength of this view can be seen, for example, in the influence of ethicist Peter Singer, professor of bioethics at Princeton University.  As one of the leading ethicists of our day, his paradigm for ethics is thoroughly utilitarian.  It leads him to some very counter-intuitive opinions about what is right and what is wrong.  He argues, for example, that killing handicapped infants is the best thing to do if the parents will have a second infant who has the prospects for a happier life (Peter Singer, Practical Ethics, 2nd ed. Cambridge: Cambridge University Press, 1993.  pp. 181-91).  How does he come to such a conclusion?  In order to understand this, you would have to have a basic understanding of the utilitarian philosophy of ethics.

“Utilitarianism is the moral doctrine that we should always act to produce the greatest possible balance of good over bad for everyone affected by our actions” (9).  By this criterion, actions considered by themselves are morally neutral—it all depends on their consequences as to whether they are good or bad.  Apart from consideration of such consequences, actions are neither blameworthy nor praiseworthy.

Because of this criterion, it is often the burden of utilitarian thinkers to convince their readers—against their better intuitions—that the reason we call certain desires or actions “good” or “bad” is not because they are bad in themselves but because we associate good or bad consequences with such actions.  Thus, we come to think of them as good or bad actions, when in reality, the actions are not good or bad, but are widely believed to have good or bad consequences.  (NOTE: In a previous post, I showed how one utilitarian took on the ambitious task of convincing his readers that the desire to torture other human beings is not wrong).

At this point, I need to make a qualification.  Many people (myself included) would probably incorporate some degree of utilitarianism in their criterion for ethics.  For example, although I personally believe that certain actions are inherently wrong (apart from evaluation of their consequences), I would still allow for the degree of wickedness to increase or decrease depending on its consequences.

For example, it’s a bad thing for a man to rape and beat a woman (regardless of consequences), but it’s even worse if as a result of the brutality, her unborn daughter is killed and the rape victim who survives gets AIDS.  This makes the crime much, much worse.

I also believe that consequences are built into the very logic of why we label actions as inherently right or wrong in the first place.  For example, adultery is wrong because it hurts the person who gets cheated on, creates the risk of irresponsible baby-making, introduces the risk of STD’s into an otherwise risk-free marriage (if both entered into that marriage without any STD’s).  Adultery is always an injustice, and it is wrong in itself.  Yet, at least a great part of the reason that it is always wrong (regardless of context) is due to its destructive consequences.  I happen to think the dichotomy between actions as inherently right or wrong verses their being right or wrong based on consequences is a bit overdone.

With this caveat on the table, then, let me proceed to distinguish what I call the utilitarian factor (incorporation of consequences into one’s ethical thinking) from utilitarianism.  While some might consider it a good thing to keep consequences in mind when making moral choices, utilitarianism has the burden of claiming that such criterion be the exclusive grounds for judging the merit of all ethical action.  On the basis of this distinction, then, I will sometimes refer to utilitarianism as exclusive utilitarianism.

McCarthy and Lysaught rehearse some of the standard criticisms of utilitarianism, for which I have given my own articulation and creative names.  They run as follows:

2) The Contrary Intuition—It often undermines our common sense and moral intuitions, often demanding certain actions that rub our conscience the wrong way.  For example, what if I knew I could cheat on my wife with my female boss without her ever finding out in order to get a raise, which would have “good” consequences for my family (less financial stress, my wife could cut back to part time to spend more time with the kids, the kids could benefit from more parental care, I could save more money for the kids for college, etc.)?  My gut tells me: Don’t do this, it is wrong, wrong, wrong.  But utilitarianism tells me it’s like a math problem (good consequences = good action).

3) The Omniscience Requirement—Sometimes it is impossible to know the totality of the potential (much less the actual) consequences of one’s actions.  Sometimes what looks to us to be a disaster turns out to be a blessing in disguise.  We get fired only to later realize that the new job we attain as a consequence pays better and is more enjoyable.  On the flip side, sometimes we think something is going to turn out great, but in the end is a big let down.  If these small scale experiences in the lives of ordinary people demonstrate how difficult it is to know the consequences of certain actions—how much more difficult must it be for people whose decisions effect an entire nation (e.g. the President) to judge the full weight of the consequences of their decisions?

I agree with McCarthy and Lysaught that these criticisms are decisive and that the wide variety of contrary opinions to the same ethical questions among exclusive utilitarians “makes clear that the theories are not doing a good job accounting for what actually shapes moral judgments” (12).

Since The Enlightenment, unaided reason so often attempts to bypass the God question and arrive at “neutral” criterion for judging right from wrong through autonomous reason (without trying to bring “religion” into the question).  In my opinion, The New Enlightenment is this: The Old Enlightenment has proven to be bankrupt for ethical foundations.  Maybe the God question is relevant after all.