Home » Posts tagged 'The Relief of Darius at Bisitun'

Tag Archives: The Relief of Darius at Bisitun

The following material is a summary of the contents on page 13.  Pictures shown below are not from the book.

The imperial domination of the Persians underwent its first serious crisis during the two years immediately following the death of Cambyses: 522 to 520 BC.  A member of the priestly class of the Medes (now known as Gaumata) usurped the throne, seizing power in Persia and legitimizing his right to rule by taking the name Smerdis who was a son of Cyrus the Great.  A Persian by the name of Darius also linked himself to the royal line and launched a counter attack and removed the threat within just 7 months.

After subjugating Gaumata, however, Darius and his generals had to spend the next year taking up arms against a series of revolts within the Empire.  Darius was able to dominate the opposing armies and take control of the empire.  To commemorate his victories and make an example of those who would rebel against the King, he ordered the construction of a relief with trilingual inscription on the cliff at Bisitun in Media.  The relief depicted Gaumata lying on his back under the foot of King Darius.  Behind Gaumata are a line of the rebellious kings whom Darius had overcome, each bound to each other by a chord that passed around their necks.  All of them are paraded in front of their triumphant conqueror.

Not only did Darius stamp out these revolts, he expanded his empire in Central Asia by overthrowing King Skunkha (also later added to the Bisitun relief, depicted on the extreme right) and by annexing the Indus valley to the empire by 518 BC.  Although the empire faced its first crisis at the beginning of Darius’ reign, the Persian empire reached its peak under the reign of Darius.

At one point the empire was so vast, and the Persian army so strong, that while  Darius’ generals led a campaign against Cyrenaica in North Africa, Darius led armies into Europe conquering the western coast of the Euxine Sea (the Black Sea) pursuing the Scythian armies beyond the River Danube (Istros).  After this campaign Darius left a strong army in Europe and charged them to annex Thrace and Macedonia.  Darius’ empire was beyond anything the ancient world had seen; it was unparalleled by any empire or kingdom to this point in history.

The revolt of the Greek cities of Asia Minor in 499-493 BC did not spoil Darius’s track record.  What we term the first Persian War cannot simply be reduced to the defeat at Marathon in 490 BC, since another consequence was the subjugation of the Aegean islands.  By this date the empire extended from the Indus to the Balkans (13). 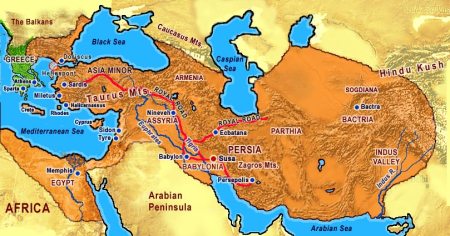