“Don’t Force Your Morality On Me” ::: Religious Intolerance, pt. 2

When confronted with the line, “You shouldn’t force your morality on me,” simply ask, “Why not?” …

He’s going to have a hard time explaining why you shouldn’t impose your views without imposing his morality on you.  This forces him to state a moral rule while simultaneously denying that moral rules exist.  This same tactic is played out in the following short dialogues:

“You shouldn’t force your morality on me.”

“Because I don’t believe in forcing morality.”

“If you don’t believe in it, then by all means, don’t do it.  Especially don’t force that moral view of yours on me.”

“You shouldn’t push your morality on me.”

“I’m not entirely sure what you mean by that statement.  Do you mean I have no right to an opinion?”

“You have a right to your opinion, but you have no right to force it on anyone.”

“Is that your opinion?”

“Then why are you forcing it on me?”

“But you’re saying that only your view is right.”

“Is that your view.”

“Then you’re saying only your view is right, which is the very thing you objected to me saying.”

“Don’t push your morality on me.”

“Why? Don’t you believe in morality.”

“Sure, but I believe in my morality, not yours.”

“Well then, how do you know what’s moral?”

“I think  people should decide individually.”

“What’s the problem?  Live and let live is your value, not mine.”

“You shouldn’t push your morality on me.”

“Correct me if I’m misunderstanding you here, but it sounds to me like you’re telling me I’m wrong.”

“Well, you seem to be saying my personal moral view shouldn’t apply to other people, but that sounds suspiciously like you are applying your moral view to me.  Why are you forcing your morality on me?”

And You Thought Evangelical Catholic was an Oxymoron? • Francis J. Beckwith’s New Book 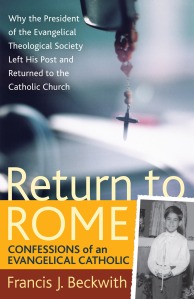 Francis J. Beckwith came out with a new book this month entitled Return to Rome: Confessions of an Evangelical Catholic.  And I just found out that he has a website and also blogs!  He was surprised to see that someone had written a review of his book so fast by none other than Southern’s very own Michael Haykin.

For those of you who don’t know, Beckwith used to not only be an evangelical Protestant, but he crossed over to Catholicism while holding the post as President of the Evangelical Theological Society. He’s no pushover. You know all those arguments we Protestants use to keep people convinced that Rome is not the place to go? Believe it or not … He’s heard all of them (and used many of them probably at some point in his life).  He became skeptical about many of them and eventually, of course, convinced they were mislead.

This is a reality Protestant evangelicals need to stare in the face: Intelligent, biblically sophisticated, well-informed, theologically sober evangelicals can find very attractive aspects in Roman Catholicism—even in RC theology.  And yes … there is such a thing as Evangelical Catholics, whether you like it or not. It’s not an oxymoron.  Click here for a definition of Evangelical Catholic.

•  To listen to an interview about why he switched over, go here and see Audio Interview Downloads on the left side of the page. •