::: Christ-followers who are also Obama-backers :::

Colin Kerr at God’s Eclectic warns Obama-backing Christians not to loose their prophetic voice and give unconditional support.  The following excerpt comes from his post, “Relating to Your New President (Part 1).”

So Christ-followers who are also Obama-backers, don’t become the Left-wing version of our Right-wing past. Reverend Jeremiah Wright, for all his fruitcake comments, did get one thing right. He said that he would switch from a supporter to a critic of Obama the moment he entered the Oval Office. It was his prophetic duty to do so. Jim Wallis of Sojourners, the day after the election, sent a message to his organization’s members (of whom very few probably voted from McCain) to join him “in ensuring that these campaign promises become a reality.”

What an opportunity progressive Christians now have to hold Obama accountable to his vision for a new way of doing politics that seeks common ground and compromises instead of wedge strategies and stirring up the base. If his actions deviate from that pledge, we have an obligation as modern-day prophets to call him out on it … Our support will not be unconditional. Our allegiance will not be tied to an earthly king. White House tours and trinkets will not placate us.Only justice finally being done in the land will.

Is Obama’s Victory a Vindication of African Americans?

My friend, Celucian L. Joseph, says not hardly, and is shocked that this would be proclaimed, of all placed, by a Christian minster.  S e e   H e r e.

Trevin Wax argues that we shouldn’t give up hope … just change our strategy.  Here’s an excerpt.

The 2008 presidential election represents a major setback for the pro-life cause. President Obama will likely replace two or three judges on the Supreme Court. His replacements are sure to maintain the majority opinion that favors Roe vs. Wade.

Despite this major setback, the ascendancy of Obama to the highest office in the land fills me with tremendous hope that the abortion debate will be turned around in this country. Why? 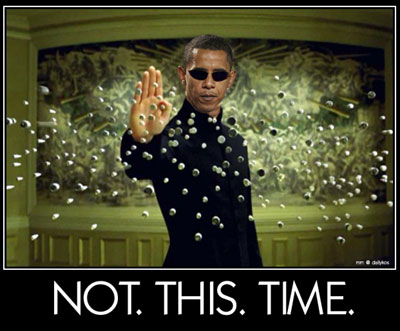 Barack Obama says he believes in the gospel

Change is Coming! … but not from the government

The following post is a guest post from my friend Aaron Skinner, cofounder of U R B A N G L O R Y.

Stock up on bottled water and canned food! Dig a bomb shelter in your basement! It’s the end of the world!

Seriously?! Those of you know me know this: I am hardly an optimist. I’ve spent more time in my life worrying than doing anything else. There is a part of me that would love to verbally rip Obama a new one and chew out the American voters for their apparent lack of discernment, but there is something to be excited about even on a night that has disappointed so many of my fellow Christians. Let’s be clear before I make my case. I did not vote for Barack Obama. I do not support his policies. But I serve a King who teaches me to render to Caesar what is Caesar’s and that simple respect is what I offer our president-elect.

The wisest man who ever lived said this in Proverbs 21:1: “The king’s heart is a stream of water in the hand of the LORD; he turns it wherever he will.” Have you ever put your hand in a water fountain when someone was trying to drink and splashed water all over their face? That’s the kind of control God exerts over the rule of any nation. It is that easy for him to soften a heart like he did with King David or harden a heart like he did with Pharoah. That means that while we may disagree with the policies that emerge from Barack Obama’s speeches, his heart and his reign is subject to the same hand that holds our own. God can direct it the same way he could have directed John McCain’s. That means regardless of our political interests, Barack Obama could be a good president.

I am reminded of another great world leader named Alexander. He expanded the greek empire throughout the known world spreading a common language, building a network of roads, and creating libraries where ancient literature could be preserved. A pagan, power-hungry, blood-lusting, bi-sexual, Alexander literally prepared the world for the coming of the Messiah and the rapid propagation of the Gospel. We have the Bible today because of his language, his roads, and his libraries. Undoubtedly God used Alexander the Great in an unimaginable way to change the world forever. Could he do the same with Barack Obama inspite of the policies with which we disagree?

Though I have no credibility that they should listen to me, if I could speak to the entire American church I would challenge us all to replace our fear and anxiety with anticipation and confidence. Will the next four years be remembered as the downfall of the American Dream or the uprising of the American Church? We’ve forfeited many of the causes we are called to champion to a political system that was never meant to embrace them. We’ve trusted a government with no power to change hearts to save us from heart issues like gay marriage and abortion. Though I wonder if our anxiety over this election had more to do with our material dreams than our moral convictions. If your heart breaks for the unborn, don’t protest an abortion clinic. Adopt a child. Build a bridge to a pregnant teen. Give money to a women’s shelter. The next 4 years may hurt our pride, our wallets, our comfort, our freedom, but please don’t let it hinder our resolve to effect REAL CHANGE with fearless faith in the Truth, constant hope in our Future, and radical love for our neighbors.

There is atleast one thing I can agree with Barack Obama on: Change is coming. Real change. But it’s going to come not through a president, congress, or court, but through a revived and invigorated Church of the Living God.

As for our president to be – Disagree with him. Don’t demonize him. Pray for him like you would pray for any leader. Love him like Jesus loves you – undeservedly. The Light of the World washed the feet of the man who would betray him. The least we can do is shine our light by serving a president we didn’t vote for.